Institutionalization of a neologism

ottobre 19, 2012
How does a new form innovated on the basis of word formation rules come to be conventionalized as part of the accepted vocabulary of a community?

This question is usually answered in terms of "Institutionalization", which is sometimes regarded as a precursor of lexicalization, sometimes identified with it.

The institutionalisation of a new term comprises the following stages:

The above distinction marks referring to the institutionalisation course of a neologism have to be observed over a long time. In order to gain further information on the term origin and diffusion, gathering of information from several newspapers and journals, magazines, specialists’ magazines, web sites and dictionaries is required. 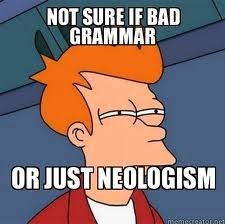