novembre 10, 2016
Translating Europe Forum 2016 took place in the wonderful location of the European Commission in Brussels from 27th to 28th October. The discussion was centred around the translation tools and technologies, with a particular focus on the point of view of the end users - the translators themselves.

Taking into consideration that the vast majority of translators tend to be apprehensive of language technologies and machine translation, the speakers of the conference reassured us by saying that the human factor is still the crucial element of the translation process. As stressed by Jost Zetzsche, interviewed by the Director-General Rytis Martikonis himself: technology is driven by humans. As language professionals, translators need to be the leaders of technological change in the field of translation, simply for the sake of ensuring that they themselves are content with the accessible software.

Since translators are quite literally the main source of income for companies dealing in translation technology, we should focus on communicating with the developers. As buyers, and more importantly, as users of their products, translators have an obligation to give tech companies all the necessary feedback that they need in order to improve their translation-assisting products. The end users’ response can affect the development process, making the product more functional and intuitive, fixing bugs, and removing the unnecessary or impractical features. (It also goes without saying aside from improving the product from the user position, we should start developing independent solutions ourselves).

There is a prevailing sense of progress in the industry. To ensure that we make the most of the chances offered by it, we have to learn to be early adopters and early adapters: being able to adopt new technologies as they appear, as well as to adapt ourselves to continuous change in the market.

With the Internet exploding with an unimaginable amount of multilingual content day by day, the number or translators required in the future is to rise, not to decline. For the same reason, and for the issue of productivity, language technology is here to stay  - and if only translators embrace it, we will have an exciting future ahead.

The Forum has confirmed that to be successful as a translator, one also needs strategy, management, social skills, empathy, negotiation, and creativity. These irreplaceable human factors will never be replaced by machines. Indeed, the type of labour which is most vulnerable against the rise of technologisation is algorithm-based – the daily work of a translator is everything but. We are not just selling words or fuzzy matches; we are selling our time and the decision-making process behind our choices. It is a highly skilled, creative labour that deserves to be compensated fairly.


What is my personal take on the conference? Well, my most retweeted tweet of this year’s conference sums up its entire message: “99% of the news about translators on the web is about concern on cheap translation. Let's start to tell a different story!” It is time to change our mindset – as translators, we are not the victims of translation technology, but its greatest beneficiaries. It is time to abandon this terrible attitude we have towards technology and everything novel, and embrace the innovation not as a rival, but as an ally. (Well, except I won’t abandon my attitude - I am a terribly curious and creative person!)

99% of the news about translators on the web is about concern on cheap translation.Let's start to tell a different story! #TranslatingEurope
— Maria Pia Montoro (@WordLo) 28 ottobre 2016


Let’s start to tell a different story by – first and foremost - respecting ourselves and what we do. Nobody forced us to be translators. We chose it, we studied it, we loved the idea. I wanted to be a translator because I was captivated by Fernanda Pivano. Translation is a high-profile occupation that provokes admiration and fascination.

Let’s turn the dust that covers our desks into stardust! 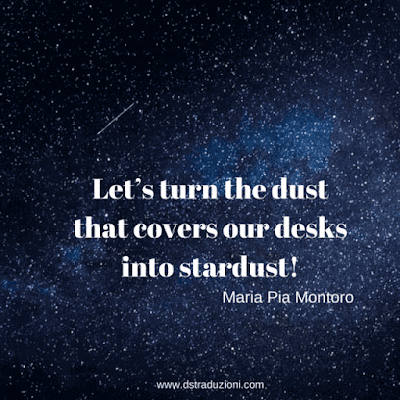